I’m writing some code in Java where, at some point, the flow of the program is determined by whether two int variables, "a" and "b", are non-zero (note: a and b are never negative, and never within integer overflow range).

I can evaluate it with

Because I expect that piece of code to run millions of times per run, I was wondering which one would be faster. I did the experiment by comparing them on a huge randomly generated array, and I was also curious to see how the sparsity of the array (fraction of data = 0) would affect the results: 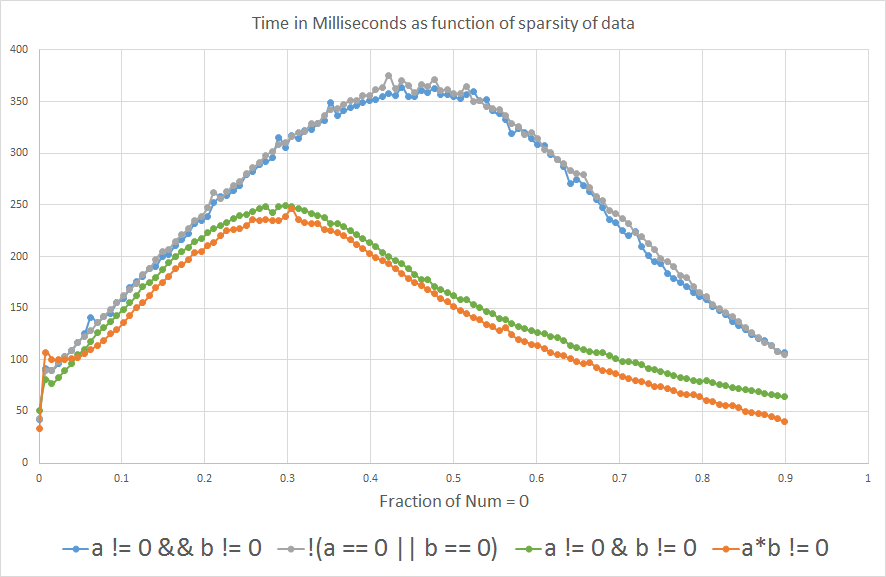 I’m curious to know why. Could anyone shed some light? Is it the compiler or is it at the hardware level?

Edit: Out of curiosity… now that I learned about branch prediction, I was wondering what the analog comparison would show for a OR b is non-zero: 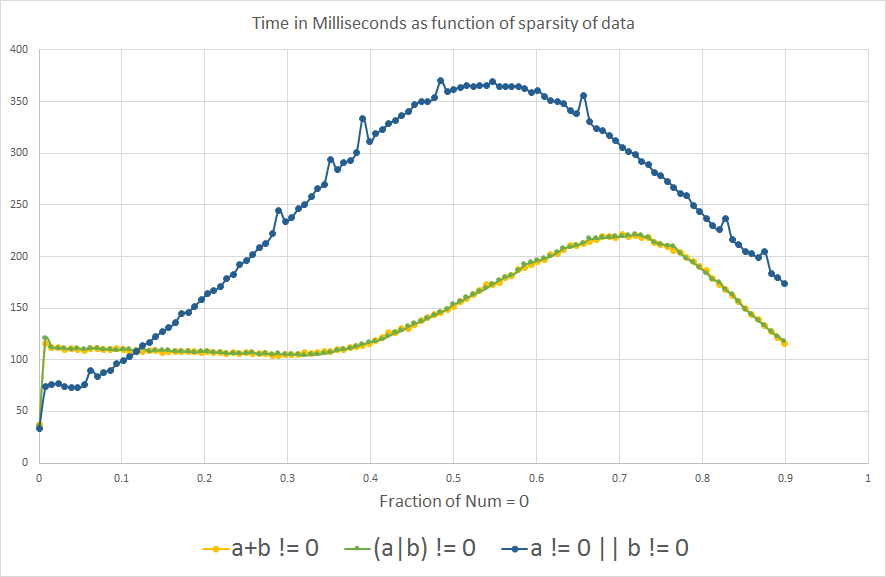 We do see the same effect of branch prediction as expected, interestingly the graph is somewhat flipped along the X-axis.

2- I also included a != 0 || b != 0, (a+b) != 0 and (a|b) != 0 out of curiosity, after learning about branch prediction. But they are not logically equivalent to the other expressions, because only a OR b needs to be non-zero to return true, so they are not meant to be compared for processing efficiency.

3- I also added the actual benchmark that I used for the analysis, which is just iterating an arbitrary int variable.

4- Some people were suggesting to include a != 0 & b != 0 as opposed to a != 0 && b != 0, with the prediction that it would behave more closely to a*b != 0 because we would remove the branch prediction effect. I didn’t know that & could be used with boolean variables, I thought it was only used for binary operations with integers.

Note: In the context that I was considering all this, int overflow is not an issue, but that’s definitely an important consideration in general contexts.

I’m ignoring the issue that your benchmarking might be flawed, and taking the result at face value.

Is it the compiler or is it at the hardware level?

That latter, I think:

will compile to 2 memory loads and two conditional branches

will compile to 2 memory loads, a multiply and one conditional branch.

The reason that conditional branches are slower is that they cause the instruction execution pipeline to stall. Branch prediction is about avoiding the stall by predicting which way the branch is going to go and speculatively choosing the next instruction based on that. If the prediction fails, there is a delay while the instruction for the other direction is loaded.

(Note: the above explanation is oversimplified. For a more accurate explanation, you need to look at the literature provided by the CPU manufacturer for assembly language coders and compiler writers. The Wikipedia page on Branch Predictors is good background.)

However, there is one thing that you need to be careful about with this optimization. Are there any values where a * b != 0 will give the wrong answer? Consider cases where computing the product results in integer overflow.

Your graphs tend to confirm what I said.

I don’t understand why the curves are different for the a + b != 0 and the a | b != 0 cases. There could be something clever in the branch predictors logic. Or it could indicate something else.

(Note that this kind of thing can be specific to a particular chip model number or even version. The results of your benchmarks could be different on other systems.)

However, they both have the advantage of working for all non-negative values of a and b.