I’m evaluating what I can get for my web site from HTTP2 in terms of performance and getting weird result – the site in Europe is loaded from US:

I’ve capture screenshots from Network monitor of Chrome and it looks like with HTTP/2 most of the resources are loaded one after another rather than in parallel like in case of plain SSL.

Captured network requests are below. Short summary:
1. Fist one – is HTML page
2. Next group – 6 requests – resources declared directly in HTML
3. The rest – resources added dynamically via script (‘script’ and ‘link/css’ tags in document/head).

Left side of the picture is HTTP/2,
right side – same staff via plain SSL (http2_module is turned off).

Update: I’ve tested “something else” what supports HTTP/2 as reverse proxy. It is nginx 1.9.7.1 Kitty from http://nginx-win.ecsds.eu – fork of original nginx ‘for windows’. HTTP/2 in original nginx is only available in commercial version, therefore I could not try it. And it looks like there are no other servers implementation of HTTP/2 + reverse proxy available for windows, or I just couldn’t find them (list here and here).

The result I’ve got with Kitty is even more misleading – there is no ‘sequential load’ of resources like in Apache, but transfer rate is twice slower over HTTP/2 than over plain SSL. Final result is – HTTP/2 is significantly slower than plain SSL. Below are all of them side by side.

Out of all this i can only assume that performance strongly depends on implementation and currently available implementation perform weirdly to make any consistent conclusion about HTTP/2. 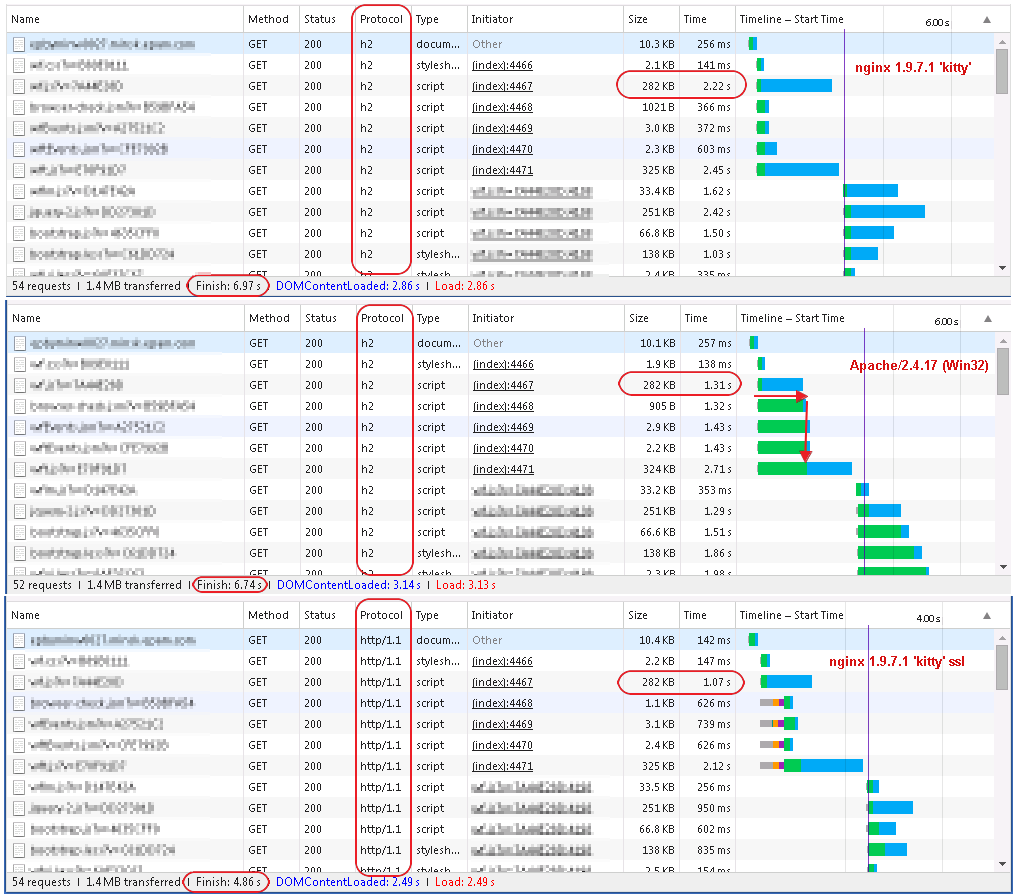 both show expected performance. Here is the screenshot for same test performed in ‘the question’, but with Apache reverse proxy hosted on linux computer of another guy here.