This is the python version of the same C++ question.

Given a number, num, what is the fastest way to strip off the trailing zeros from its binary representation?

For example, let num = 232. We have bin(num) equal to 0b11101000 and we would like to strip the trailing zeros, which would produce 0b11101. This can be done via string manipulation, but it’d probably be faster via bit manipulation. So far, I have thought of something using num & -num

If we have a dict having powers of two as keys and the powers as values, we could use that to know by how much to right bit shift num in order to strip just the trailing zeros:

The use of dictionary POW2s trades space for speed – the alternative is to use math.log2(pow2).

Is there a faster way?

Yet another alternative is to use a while loop

You say you "Ultimately, [..] execute this function on a big list of numbers to get odd numbers and find the maximum of said odd numbers."

So why not simply:

To do what you say you want to do ultimately, there seems to be little point in performing the "shift right until the result is odd" operation? Unless you want the maximum of the result of that operation performed on all elements, which is not what you stated?

I agree with @TimPeters answer, but if you put Python through its paces and actually generate some data sets and try the various solutions proposed, they maintain their spread for any number of integer size when using Python ints, so your best option is integer division for numbers up to 32-bits, after that see the chart below:

Result (when plotted in Excel): 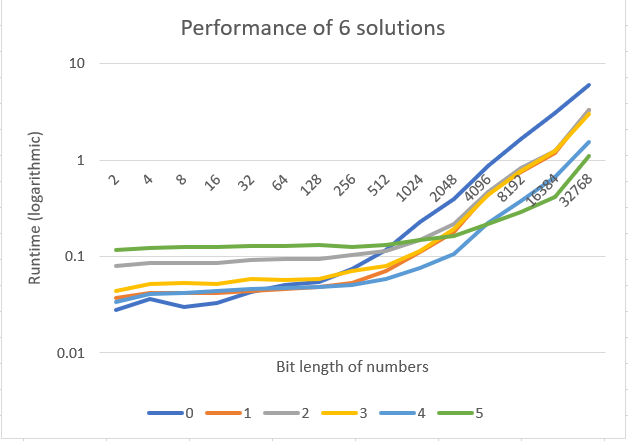 Note that the plot that was previously here was wrong! The code and data were not though. The code has been updated to include @MarkRansom’s solution, since it turns out to be the optimal solution for very large numbers (over 4k-bit numbers).