I’ve encountered an unusual bug in Excel that results in the whole programme crashing without warning, any form of error notification (including upon startup), or any acknowledgement that it crashed. This occurs when I have a particular workbook open and then I try to open another one; at this point Excel effectively just ‘end task’s itself.

I’ve played around with a copy of the workbook at fault and seem to have narrowed it down to a combination of four factors. If any of these factors are removed the bug doesn’t appear to occur, and creating them in a fresh workbook seems to cause the issue to occur (i.e. it’s replicable and not just that specific original workbook).

These four factors are as follows:

At this stage I could probably tweak 1+ of the factors to avoid the bug, but I’m keen to understand what’s going on before deciding what the best course of action going forward is. Any help/support would be greatly appreciated, and I’m happy to provide additional information, etc. if needed.

Giving the office 32 bit version and one add-in that you have listed I can get some pointers on at least one of the factors:

I have noticed that having Oracle Smart View enabled causes the error "Out of memory" to display when you have UDFs on the workbook (even if you are not using any functionality/API from Oracle) and UserForms coded (even if they don’t get called at all either or are in another opened WBs and even after closing the stated WBs). I am not quite sure if this happens in 64 bits versions with Oracle, but at least I can confirm this behaviour happens oddly in 32 bits machines: 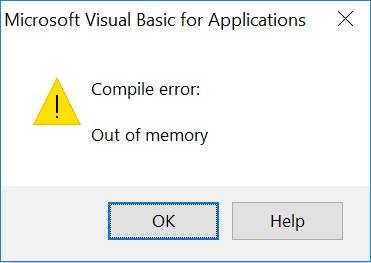 Sometimes this message crashes excel without notice when the app tries to display it.

Some fixes/workarounds that I have found:

As per your scenario, I am quite sure it’s related to the UDF. Try some scenarios without the UDF in the file, there may be a chance that conditional formatting may be causing it too, I would do a few tests just to confirm that is or isn’t the case. I am mostly sure by doing the previous you will dig into the root cause, if this is the case, your only way to go is calculate the formula as needed and do not leave UDFs within the Workbook, it may be a hassle for the user, but in general, it speeds up and this kind of approach leaves a smoother experience in terms on navigation and performance. Having said that, by quoting your Factor 1 and 4, I would change that portion to something like:

I would set a shape to call the Exec_Formatting: it will be the balance of speeding up at the cost of the user pressing a button.